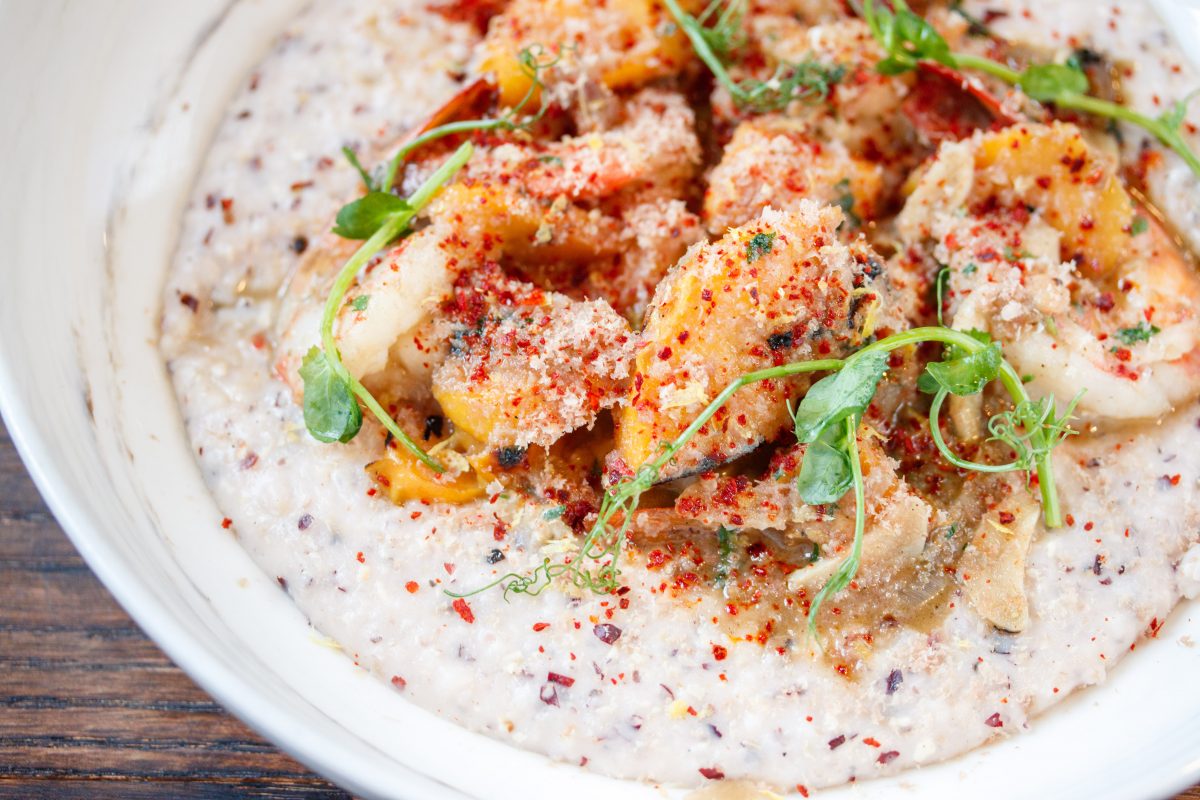 Dry-aged brisket over buttermilk-potato purée, Royal Red shrimp and grits with grilled peaches, and a cornmeal-crusted fried chicken that happens to be gluten free have landed on the new menu at Deacon’s New South alongside the A5 Wagyu and Tomahawk ribeyes. The downtown restaurant continues to sharpen its focus on cuisine that’s distinctly Nashville, rooted in the city’s historic culinary traditions but complemented by a modern, creative take on New Nashville’s epicurean influences.

“Being in the heart of downtown in the iconic L&C Tower, we have an opportunity to offer a uniquely Nashville dining experience,” said Andy Marshall, CEO of A. Marshall Hospitality. “Long before it became a global destination, this city was known for its unique culinary traditions that drew inspiration from all over the world. In recent years, new influences have elevated our profile as a food town. We wanted to capture all of that in a way that leaves locals and visitors with a lasting impression.”

With the largest dry-aging facility in the Southeast located just outside the restaurant’s kitchen, Starling and his team have expanded Deacon’s selection of proteins beyond the prime cuts of beef for which it’s become known. Dry-aged brisket from Bear Creek Farm graces the dinner menu as an ode to Puckett’s, the restaurant’s sister concept and downtown neighbor. The brisket is aged in the restaurant for 30 days, then lightly smoked and slow roasted before it’s ready to serve to guests. For Marshall, it’s a fond look back to his competition barbecue roots, when he would experiment with aging and slow cooking techniques to coax out the flavor and tenderness.

Deacon’s fried chicken — breaded in cornmeal and served with potato purée and braised collards for a dish that’s accidentally and entirely gluten-free — and the “Meat and 2” lunch entrée also nods to Nashville’s lunch counters and to Puckett’s down-home staples. Its new burger is ground in-house with a custom blend of dry-aged steak, brisket and Gifford’s Bacon, grilled and then topped with Fontina, pickled red onion, butter lettuce, smoked onion aioli, and more Gifford’s Bacon.

Standout starters include deviled eggs with bacon jam and braised beef cheeks atop made-to-order skillet cornbread. Salumi and ham are cured in-house from a 100-day-old starter before landing on Deacon’s charcuterie board among specialty cheeses, grilled homemade sourdough and other garnishes.

The “new South” theme extends to Deacon’s offerings for brunch, as well, a favorite Nashville pastime and a draw for visitors who seek an authentic Music City meal. Midday favorites like chicken and waffles get an update with Peach Truck peaches and bourbon-sorghum syrup (with the option to order the chicken “Nashville hot,” of course.) Steak and eggs, shrimp and grits with peaches and Tennessee ham, and a seasonal pastry board from new pastry chef Patrick Wellman are just a handful of sweet and savory brunch bites that complement the restaurant’s two-for-one mimosa special on Saturdays and Sundays.