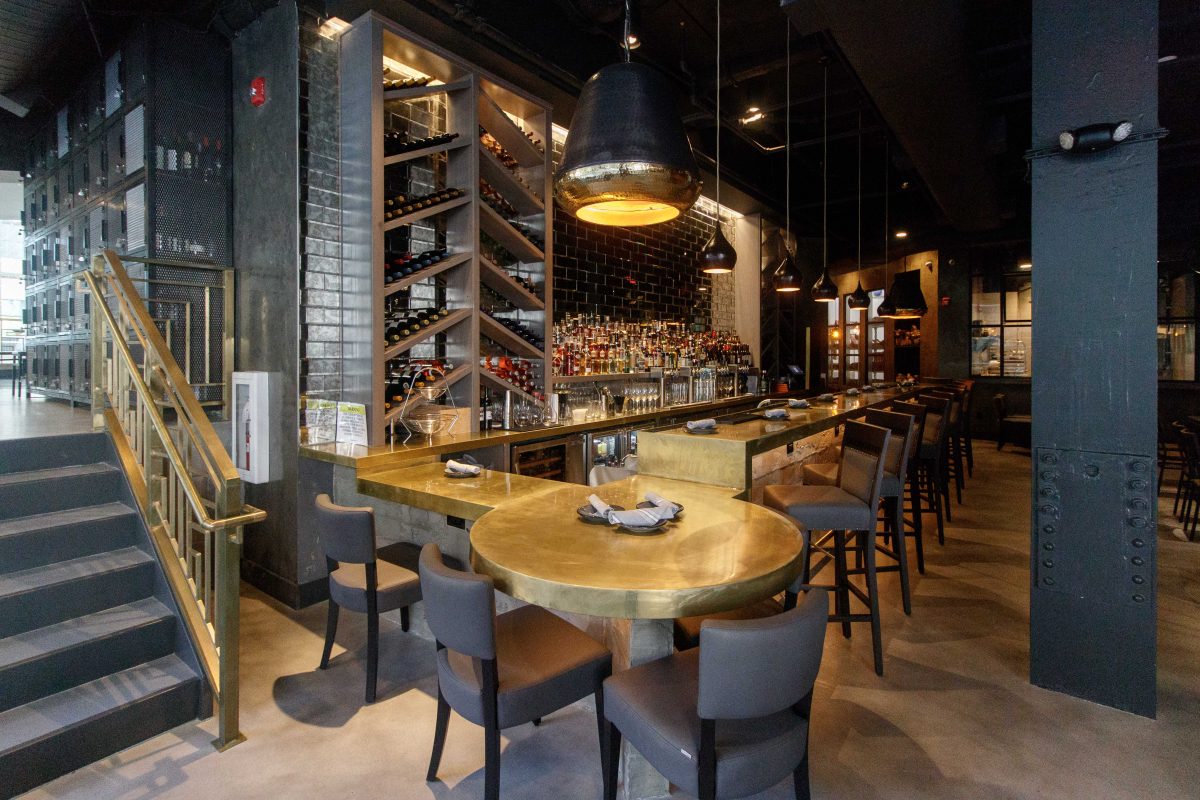 From nearly any point in and around downtown Nashville, the historic Life & Casualty Tower stands as a beacon in the familiar skyline. On the first floor of Nashville’s oldest skyscraper – once the tallest building in the state – is Deacon’s New South, a modern culinary concept with a southern slant that offers a different experience for guests than its traditional steakhouse peers.

The restaurant, opened in 2017 by seasoned restaurateur Andy Marshall of A. Marshall Hospitality, was born out of Marshall’s desire to create something unique. His other concepts, Puckett’s Gro. & Restaurant, Puckett’s Boat House and Scout’s Pub, lean more casual, with an emphasis on down-home fare and live music at the two former and a laid-back, neighborhood pub vibe at the latter. Deacon’s, a name inspired by Marshall’s college moniker, naturally developed into its own category. It’s not a steakhouse, although the premium selection of choice cuts dry-aged in-house has landed it on more than one list of must-tries for meat lovers. The menu’s selection of proteins is balanced by seafood dishes inspired by the Gulf, inventive sides with locally sourced veggies and a robust, sommelier-led beverage program, setting it apart from its sister and neighboring eateries.

With culinary veteran Chad Starling at the helm as executive chef, Deacon’s has made an intentional shift toward a decidedly southern concept, with an updated, creative take on the region’s traditional cuisine. The menu makes enough of a case for the restaurant’s success, but a walk past its floor-to-ceiling windows along Church Street offers an intriguing glimpse into the thoughtfully designed space. Meant to attract immediate attention is a prominent dry-aging room in the main dining area, where prime cuts of beef, pork and other proteins are on display. An exposed kitchen setting provides transparency to the culinary team’s activities, where guests can watch their meals being prepared and even select their own cuts of meat if desired.

Two bars, an eclectic lounge, a private dining area and a patio that borders the restaurant’s sides on 4th Avenue and Church Street complete the split-level space, where details like antique Tennessee law books and vintage church signs are subtle reminders of Deacon’s inspirations. Its new industrial design, juxtaposed with bold architectural patterns and brass finishes that harken back to the building’s 1950’s art deco influences, marries the past with a modern vibrancy that’s comfortable and inviting.

I recently visited Deacon’s New South, got to tour the amazing space and chatted with Chad and the staff. While there, select cocktails and dishes were provided for a tasting, showing off the unique culinary vision and skills set forth at the eatery.

I tasted the Black Manhattan signature cocktail, which set itself apart with George Dickel Rye Whiskey and Averna, giving the drink a sweeter taste and a rich, dark color. Then I enjoyed the Blue Eyes Crying In the Rain, which is one of the most beautiful drinks I have ever seen. It consisted of Ford’s Gin, Crème de Violette, frothed egg white and lemon and garnished with delicate, edible flowers. The flavor was unique with citrussy smoothness. It was hard to sip this cocktail, as I kept wanting to take pictures of it!

The entrée I tried was the Gulf Fish, which changes depending on the fresh catch that Chad decides on featuring. During my visit, the fresh catch was Red Snapper. This flavorful fish was served atop a bed of dirty fried rice, nettle pistou and peppadew-peanut romesco. Between the kick of the spices and the sweetness of the romesco, this plate was delicious. I loved the seared flavor of the fish and the mix of textures in this dish. Luckily I came with an appetite, because I just about ate it all before trying the dessert!

I finished with the Dulce Panna Cotta… OH MY! This pretty, little, sweet dish serves up maple brown ale mouse, toasted pecans and pecan praline. I have never tasted anything like this dessert. It was so creative with the flavors and presentation! I am typically a chocolate person, but I have to say that I really enjoyed this dessert. The maple and pecan flavors gave it a richness but also not over the top sweetness. I was told it was a favorite among guests and I can see why.

I cannot wait to go back and enjoy the same dishes as well as try out many others. The challenge will be deciding what to try next. Deacon’s New South is open for lunch and dinner Monday through Friday, with weekend brunch from 10 a.m. to 3 p.m. on Saturdays and Sundays. Visit deaconsnewsouth.com to learn more.

Pick up a copy of Your Williamson‘s June issue to read the story in print!